SmartBus in Aalborg: automated vehicle for social cohesion and inclusion SmartBus, a project being pioneered in the Aalborg Municipality in Denmark, is testing automated buses in an effort to connect urban and peri-urban districts. The initiative, which is the first (free to use) driverless bus in the Astrupsti area in Aalborg East and the first autonomous vehicle in mixed traffic in Denmark, aims to provide local residents with access to new mobility options, while meeting long-term sustainability goals.

Aalborg Municipality together with Aalborg University, Nordjyllands Trafikselskab and Holo (an integrator and operator of autonomous vehicles), have launched a 2-year pilot project to increase access to public transport for the inhabitants of the city.

Aalborg is the main city of the North Jutland region in northern Denmark. The population of the city itself is approximately 130,000, which rises to around 200,000 for the whole of the Aalborg municipal area. With 1,900 km of roads, Aalborg is the third largest municipality in Denmark.

At the heart of the project is its strong social dimension, which aims to bring neighbourhoods closer together, so providing a sense of unity and local ownership. The pilot is being implemented in the suburb of Astrupsti, an area characterised by dispersed housing and a lack of accessibility. The district is characterised by 1960s’ planning that followed functionalist principles, and which created a traffic-efficient, but physically and socially divided, district. Indeed, fewer than 50% of the residents of Aalborg East have access to a car. The project aims to enhance access to mobility options, while maintaining the affordability of services.

The system being trialled is characterised by a digitally enabled and integrated system, which is designed to create a reliable and easily accessible service. It operates with two buses (and one in reserve) that travel at 18 km per hour. There is a fixed route of 10 stops, covering a 2.1 km stretch, with a journey time of 20 minutes. The buses navigate using cameras and a three-dimensional map of the route. However, they are still manned by an operator who, with a joystick in hand, is able to take over if something goes wrong. The intention for the longer term is that the buses will run completely without staff. The buses are electric, autonomous and navigate using a range of sensors and light detection and ranging (LIDAR) technology. Real-time tracking of the buses is available via the ‘Letsholo’ phone app.

Automation is a relatively new technology within public transport. The self-driving bus in Aalborg moves using an encoded map and Global Positioning System (GPS), which can detect movements and obstructions within a 60-metre radius of the bus in all directions. However, the bus is not able to overtake pedestrians and will remain behind them if they stand in its path. It will brake if individuals veer into its path.

A particular focus of the system is to provide mobility for the elderly and those with disabilities. The route connects elderly care centres, hospitals and schools, as well as cultural and sporting institutions that have accessible entrances. 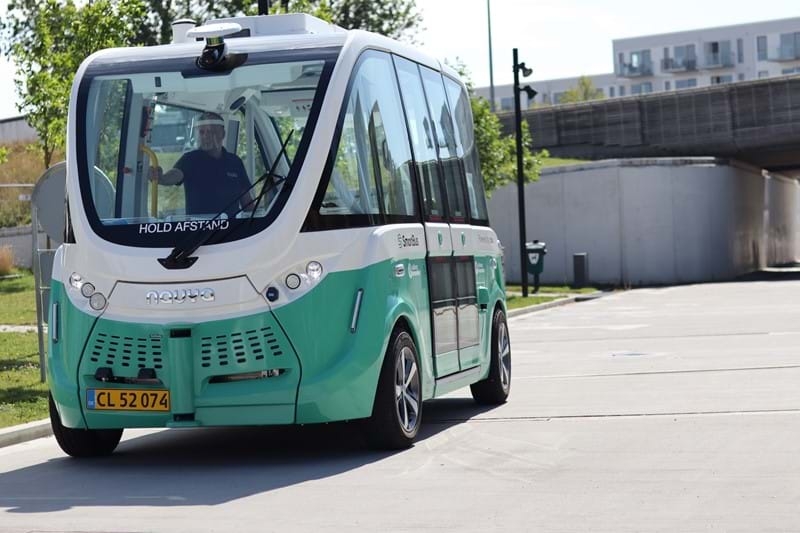 As other cities begin to trial automated transport services, the Smartbus project is an excellent case study to learn from. As many other projects – including SUNRISE, INDIMO and INCLUSION – have sought to place citizens and their mobility needs at the core of new local urban transport services, Aalborg’s approach will increase the capacity of public transport to integrate communities and vital services.

However, critical challenges remain. At present, there are no cars on the route that the bus operates. If such technologies are to be integrated into the wider urban transport system, their relationship with passenger vehicles, pedestrians, cyclists and scooter users must be addressed. In addition, while the aim is for the buses to be fully automated, at present operators must intervene to pass obstacles, such as parked cars.

Coronavirus (COVID-19) has also posed a challenge for the capacity of the buses. At the beginning of the pandemic, services were suspended altogether. Today, organisers have reduced the maximum number of passengers to maintain social distancing. This may have curtailed its benefits for the local community. However, services will be able to accommodate more passengers in the future once the pandemic subsides.