Cargo bikes are the solution to urban transport problems. Although this may sound a bit far-fetched, it is not too far from reality. Cities are facing severe challenges due to an increasing number of urban deliveries and private car trips. In turn, this results in increased emissions, an invasion of public space, loss of time and resources, and challenges relating to road safety. Cargo bikes hold the key to tackling many of these problems – they can help reduce the number of delivery vans blocking roads, cycle paths and pavements; they reduce the number of car trips needed to purchase goods or take children to and from school; they reduce the need for road repairs and private motorised vehicle sales; and they strengthen communities by simply riding a bike. Cargo bikes use less space and fewer resources; produce fewer or zero emissions at the point of use; and are an economically viable substitute for last-mile journeys by vans and private cars.

Cities have many options to foster the uptake and roll-out of cargo bikes, and there are many good practice examples, as well as supportive community and development initiatives from which cities can learn.

Many EU cities are facing severe challenges due to urban transport. Cities are responsible for 40% of transport-related carbon emissions and 70% of all other transport-related pollution. Noise and air pollution account for more than 400,000 premature deaths per year in the EU. Additionally, a lack of physical activity further increases the toll on public health due to an increase in non-infectious diseases. Congestion, mainly located in urban areas, costs about 1% of the EU’s gross domestic product (GDP), resulting from a loss of time and resources. To a large extent, cities still cater for motorised transport (such as setting aside public space for parking), which goes against the idea of making more efficient use of public space and improving the quality of life.

One option to address these challenges lies in the field of cycle logistics. The EC’s Sustainable and Smart Mobility Strategy of 2020 (Flagship 4 – Greening Freight Transport) addresses the need for sustainable urban logistics plans to accelerate the deployment of existing zero-emission solutions, such as cargo bikes. The evaluation of the Urban Mobility Package also confirms the need to address urban logistics as a key driver to achieve sustainable mobility systems within our urban areas.

During the coronavirus (COVID-19) pandemic, the importance of tackling the volume of urban logistics traffic became more evident. This was due to the sharp rise in e-commerce – and the consequent increase in the use of courier, express and parcel services – instead of customers visiting physical stores. May 2020 alone saw an increase of 71% for the e-commerce sector.

Together, the transport problems of the pre-pandemic situation and the accelerated increase in deliveries during the pandemic, have resulted in a traffic burden for cities. This is clearly visible in the number of delivery vans blocking roads in major retail areas and occupying public space intended for other uses.

As noted above, cargo bikes – or, more generally, cycle logistics – fit in well as a solution to many of the challenges faced by cities. Already rising in prominence during the 2010s, cycle logistics will remain an increasingly important solution in relation to the goal of carbon-dioxide-free city logistics by 2030 and an alternative to single-occupancy car trips. EU-funded projects such as Horizon 2020’s CityChangerCargoBike and its three forerunner projects (NOVELOG, SURFLOGH and SMARTSET) have focused on the increased use of cycle logistics.

There is high potential for cargo bikes to replace motorised transport in goods and business-related journeys: 25% of all goods deliveries (such as the use of courier, express and parcel services or postal deliveries), 50% of all business-related transport (such as for tradespeople or road cleaning) and up to 77% of shopping trips can be replaced by cargo bikes. Moreover, cargo bikes also benefit private users, ranging from the easy transportation of children (and adults) and goods, to increased social interaction.

Cities have several reasons to promote the use of cargo bikes. The ‘Mayor’s Guide to Cargo Bikes’, published by Horizon 2020 project CityChangerCargoBike, clusters these into six areas:

Cargo bikes can be used to deliver food. In the Austrian capital, Vienna, Rita Bringt’s delivers lunches for people in offices and homes by cargo bike. The service benefited from a municipal subsidy to buy a cargo bike to establish the business. The Austrian Samariterbund provides a meals on wheels service, mostly catering for older people, and has shifted about 200,000 kilometres of vehicle driving to its cargo bike fleet in Vienna. The Samariterbund has been awarded national mobility prizes as a result of its success.

Cargo bikes offer retailers the option of delivering goods by cargo bike and selling them directly on the street using the cargo bike as a mobile sales booth. A flower sales company, Bike and Bloom, based in the Danish city of Copenhagen, makes use of both of these options, while DieFahrBar (the moving bar), based in the Austrian city of Graz, caters for on-street customers and those at specific events using a mobile coffee sales cargo bike.

Cargo bikes offer a range of options for urban logistics. Many cities are piloting or operating urban consolidation centres or micro-hubs to organise last-mile deliveries by cargo bike in denser inner-city areas.

Berlin in Germany has tested a range of pilot projects, such as the BentoBox pilot that tested last-mile delivery by cargo bike for business-to-business deliveries. Within a 3-month test period, more than 650 deliveries were made using the BentoBox for direct pick-up by customers or last-mile delivery, mostly by cargo bikes. About 85% of last-mile trips from the Bentobox were made by cargo bike. Berlin also tested a micro-hub serviced by five major courier, express and parcel providers that are active in the city. The pilot, called KoMoDo, offered these providers an independently managed facility for last-mile deliveries by cargo bikes and other environmentally friendly vehicles. The pilot was a success and motivated courier, express and parcel providers to install their own micro-hubs. Berlin has further extended the use of micro-hubs, including the installation of a new micro-hub that services the area of Berlin-Tempelhof.

Other cities, such as Prague, the Czech capital, are testing cargo bike depots. Prague started a pilot project with seven delivery service providers in December 2020 using a former car park in a central location. The depot was equipped with services for the couriers, such as cooking space, charging stations and showers.

A different cargo bike model is run by Swiss logistics business Kurierzentrale. The company integrated different cargo-bike options into its urban delivery services. It also added an intermodal delivery option combining cargo bikes and passenger trains, in which parcels are transported to passenger trains by cargo bike couriers and then delivered by cargo bike for the last mile of the trip at the end of the train journey. Hamburg in Germany is collaborating with courier company UPS in the use of micro-hubs in its inner city areas. Since the start of 2021, the city has been running its own pilot for a micro-hub used by four different courier, express and parcel providers. 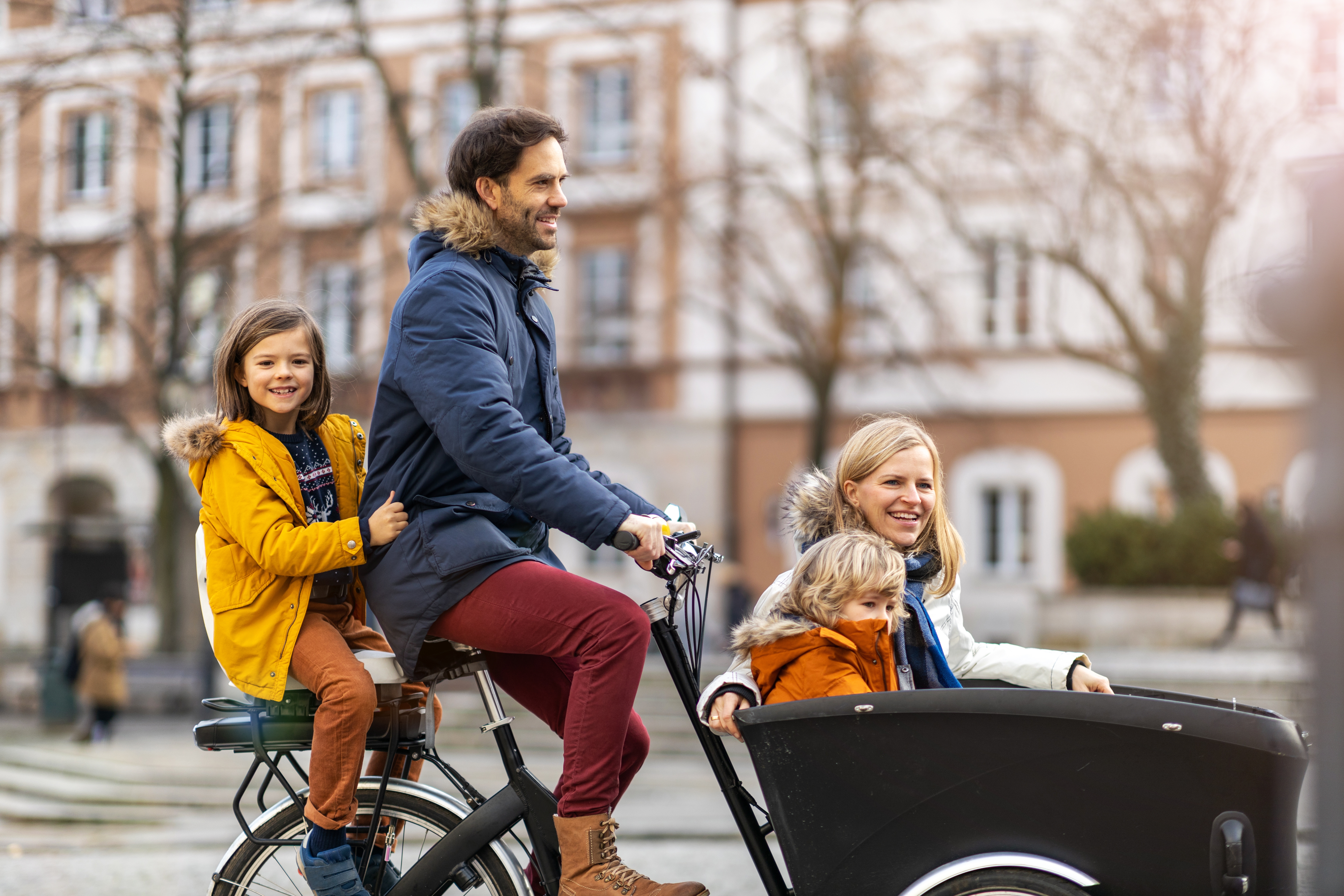 Subsidies for purchasing cargo bikes are increasingly targeted towards private users. These subsidy schemes are popular and there is a broad range of offers. There are more than 60 subsidy schemes in Germany and Austria and many more all over Europe, as in the case of the city of Gdynia in Poland that runs a scheme to support the purchase of cargo bikes for residents. Cities want to make more people aware and interested in the use of cargo bikes. In Norway’s capital, Oslo, parents with children meet up for organised tours near recreational paths and safe cycling areas in the city. There is a wide variety of similar initiatives in many countries.

Cargo bikes provide opportunities for people to connect, as in the case of Baby Biking Meetup in Oslo. A better-known example is the Cycling Without Age campaign, which originated in Denmark. The idea – to invite elderly people from retirement homes on a cargo bike trip – has spread all over Europe and beyond, and is present in more than 50 countries. Cycling Without Age works with volunteers to cycle with people who cannot do so on their own.

The public sector provides many options for promoting the use of cargo bikes beyond the widespread cargo-bike purchase subsidies, for example:

Cities are also piloting other support actions, such as the French city of Strasbourg where cargo bike parking racks are being tested.

Today, cargo bikes constitute an increasing market for urban logistics and private use. The results from the pioneers, pilot projects and well-established services illustrate the benefits of using cargo bikes.

Cargo bike schemes exist in a number of other cities and many more are under preparation, such as in the German city of Bielefeld, which started a trial in March 2021. 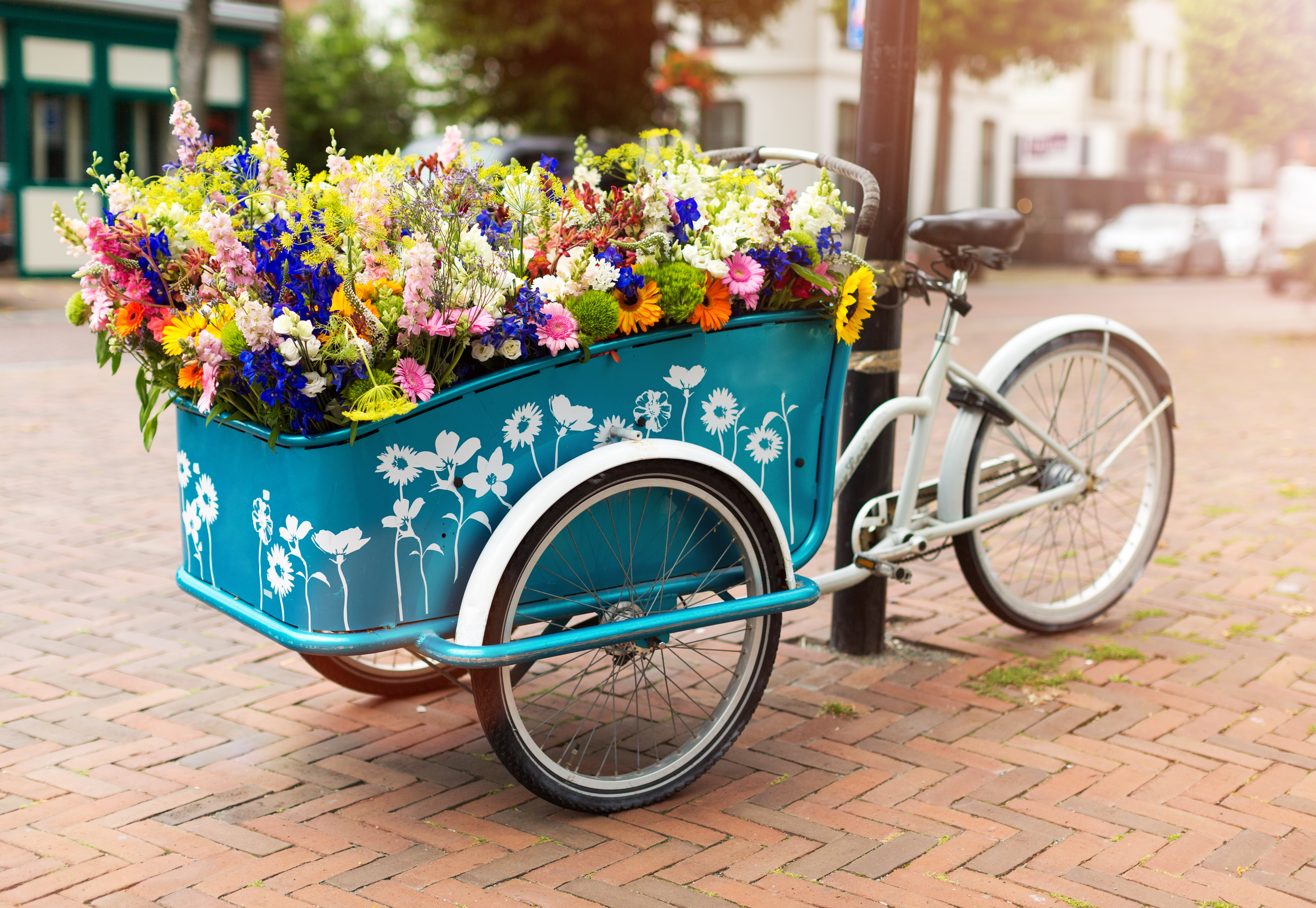 The many uses and pilot projects have resulted in the following lessons learnt.

For purchase subsidy schemes, research by the city of Vienna, which was undertaken before the city installed its own purchase subsidy scheme, showed that subsidies with low funding rates are not that widely used. Moreover, a subsidy scheme works better in combination with good public relations and a focus on businesses and private users. The quick take-up of available resources in some cities suggests that it makes sense to ensure that funding is available over a longer period of time. In Graz, funds have been provided for the purchase of cargo bikes since 2011 to mitigate the emissions of particulate matter originating from traffic.

Micro-hubs increase the economic performance of cargo bike logistics when placed within a short distance of a high number of delivery destinations. Ideally, distances should be up to 3 kilometres. It is important to use the model of an independently managed micro-hub with a high degree of flexibility in terms of organising the trips to accommodate the needs of different courier, express and parcel service providers. This is demonstrated by Berlin’s KoMoDo pilot scheme or the recent example in Prague. It is preferable for micro-hubs to be integrated into the basements of buildings or in well-designed facilities, rather than in public space with containers on display.

The Horizon 2020 project CityChangerCargoBike has summarised the options for cities in fostering the use of cargo bikes:

Detailed information and dedicated topic guidance is available for the promotion and roll-out of cargo bikes, as follows:

Photo Credits: © R_Boe and pikselstock - no permission to re-use image(s) without separate licence from Shutterstock